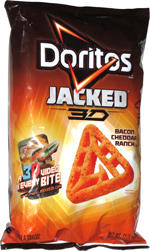 Taste test: The revival of the Doritos 3D brand continues, as after a decade of being dormant, we've seen in the span of four months first a Jalapeño Pepper Jack version and now this Bacon Cheddar Ranch one. The snacks had the same shape as the other recent one, not pillow-like like the old days, but instead in some sort of triangular pattern.

I crunched in to find a nice crunch and a Fritos-like texture. The taste was pretty good, but the Doritos folks might have been too ambitious here in attempting to combine bacon, bender and ranch. Mostly I could taste the cheddar, and there was some minor zest to it, but I really couldn't detect any actual ranch or bacon flavor. A fairly subdued flavor for something billed as being "Jacked," but still, pretty good.

Smell test: A lot going on. There was something in addition to the taste corn smell, but with bacon, cheddar and ranch all (in theory) crammed in there, I couldn't really smell any of them.

From the package: “A 3D video in every bite” ... “The first chip ever with bite-sized 3D videos inside.”