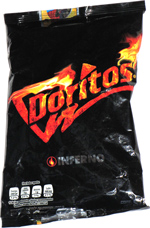 Taste test: This version of Doritos from Mexico had a light red color, not really a scary red color as we've come to expect from many hot Mexican snacks, but in fairness, the color was similar to the flaming Doritos logo on the bag (the red parts of it, anyway). Speaking of which, we really liked the inferno of a Doritos logo on the bag. Putting the color aside, the "Inferno" name had us expecting some serious heat.

I crunched in to find a tangy flavor that was not particularly hot, at least for the first few bites. Meanwhile, the texture was similar to most of the Doritos we've reviewed, but it was a bit less brittle and less crisp. As I ate more chips, the heat did pick up quite a bit, but it still fell short of the 3rd Degree Burn chips and far short of the Fiery Habanero ones. I ate the whole small bag in one sitting, and there was some heat, but it didn't feel like there was quite an inferno in my mouth.

Smell test: Kind of a vinegar-like sting on first whiff. But not really like hot sauce or anything after that.