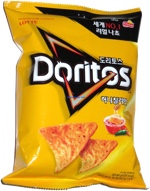 Taste test: This flavor of Doritos from Korea looked much like ordinary Doritos, with a mix of yellow and orange plus some dark spots.

I crunched in to find the usual Doritos texture — but a very unusual progression of tastes. First it was a savory taste, a nice mix of spices that wasn't particularly honey or chili. Then came a big wave of sweetness, apparently the honey. This was followed by some chili pepper heat, not super hot, but reasonably so, and quite tasty! Good snack.

Smell test: Definitely a chili kick, with a sweetness that wasn't the usual. Odd but good. Honey could explain it.