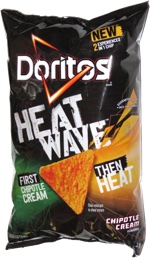 Taste test: These chips were the first we've found (along with a concurrently discovered BBQ version) that promised a two-stage taste, starting "cool and tangy" and then super-hot. We've actually noticed just this pattern in many snacks we've reviewed, but in this case it was actually the stated point of the snack.

The chips looked like fairly standard Doritos, with a color much like the Nacho Cheese ones. There appeared to be a lot of powder on the surfaces. I crunched in to find the usual excellent Doritos crunch, with an initial taste that was indeed creamy and not hot, but also a bit strange. Not really bad, but just an odd taste briefly. As promised, it quickly transitioned into a hot chipotle pepper taste. Initially, it was just somewhat hot, but the heat kept growing strong for a few minutes in the aftertaste, so I would say it ended up impressively hot. Not world-record hot (Hi Paqui Carolina Reaper!) or anything close, but still pretty hot. Pretty good.

Smell test: Good zesty smell, but not too different from the Cool Ranch ones.

From the package: “2 experiences in 1 chip” ... “First chipotle cream then heat” ... “New Doritos HeatWave delivers a one-two kick. First it's cool and tangy, then it's — WAIT FOR IT — fiery hot. Once you crunch, a burst of heat is released for an intense flavor experience.”

This snack was discovered by Jeremy at Stop & Shop. Review published June 2017.