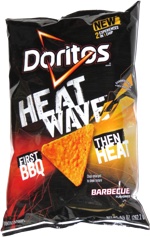 Taste test: Like the companion Heat Wave flavor Chipotle Cream, this Doritos flavor promised a two-stage taste, in this case a sweet and smoky barbecue followed by a massive wave of heat.

The chips looked pretty much like ordinary Doritos, with an orange color much like the Nacho Cheese ones. I crunched in to find that the first taste was indeed smoky and sweet without being hot. Barbecue is fairly rare among the wide array of Doritos flavors (we've reviewed more than 100), so aside from being a bit novel, it was also quite tasty, with a nice mix of sweetness and smoke. Even with a delay, there wasn't much heat from that first chip. So I ate about five more. That helped to build up some heat in my mouth, but it really didn't hit like a wave and wasn't super-hot. It didn't even match the heat level of the Chipotle Cream ones. Still, a good taste, and a delayed heat as advertised. Just not that hot.

From the package: “2 experiences in 1 chip” ... “First chipotle cream then heat” ... “New Doritos HeatWave delivers a one-two kick. First it's sweet and smoky, then it's — WAIT FOR IT — fiery hot. Once you crunch, a burst of heat is released for an intense flavor experience.”

This snack was discovered by Jeremy at Stop & Shop. Review published June 2017.