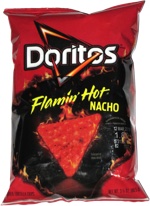 Taste test: This version of Doritos had the same intensely red seasoning powder that we've seen in other Flamin' Hot flavors from Frito-Lay, definitely more red and less orange than Nacho Cheese Doritos.

Before evaluating the flavor, we'll note here that they called the flavor "Flamin' Hot Nacho" rather than just "Flamin' Hot," so we expected to taste not just heat, but also the delicious cheese that they use in Nacho Cheese Doritos. That was also the idea behind one ones variously labeled as Spicy Nacho or Spicier Nacho, though presumably in this case they promised even more heat — and Spicy Nacho delivered even less than we had hoped. A Flamin' Hot Nacho version seemed like a chance for Doritos to redeem themselves for the weak heat of Spicy Nacho.

We crunched in to find the usual Doritos texture, with an initial taste that was cheesy but not hot, gradually growing hotter after that as it transitioned into a fairly hot aftertaste. The thing is, the cheese and heat hit at different times, so I never really tasted the combination of the two. With the cheese taste being brief, the heat had a much bigger effect on me. The heat wasn't killer, but it was pretty hot, and the failure to combine the cheese with the heat left me disappointed, as the heat by itself was just heat, not enticing flavor.

Having tried a number of kinds of hot Doritos, there were definitely some that brought together good flavor with heat more successfully then these, including Flamas, Collisions Blaze/Ultimate Cheddar, 1st Degree Burn Blazin' Jalapeno , 2nd Degree Burn Fiery Buffalo and 3rd Degree Burn Scorchin' Habanero.

From the package: “Nacho cheese gets lit.”

This snack was discovered by Jeremy at Rite Aid. Review published January 2019.