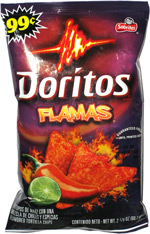 Taste test: This flavor of Doritos had a seasoning powder more intensely red than any Doritos flavor we've tried. It was pretty much the same color as the Sabritas Turbos Flamas, though obviously in a Doritos shape this time.

I crunched in and quickly found that these were very tasty chips — and also very hot ones. The first bite had a good mix of hot peppers and lime, but soon after that the heat really kicked in a serious way. Definitely the hottest Doritos flavor so far, with enough heat to really clear the sinuses after eating just two chips. I had a cup of fruit juice to try to temper the hot aftertaste, but the burn came right back and lingered for quite a while. Great!

Smell test: Kind of a sweet tangy smell, though definitely some peppers in there too.

This snack was discovered by Jeremy at CVS Health. Review published June 2011.