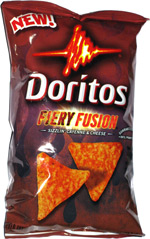 Taste test: This new Doritos flavor appeared at the same time as a identically named Cheetos flavor, and that's a rarity in Frito-Lay's world. It also came on the heels of a similar Lay's Kettle Cooked flavor, Spicy Cayenne & Cheese (as the Doritos and Cheetos were both subtitled "Sizzlin' Cayenne & Cheese" underneath the Fiery Fusion brand).

The chips looked the same as standard Nacho Cheese Doritos, with lots and lots of orange, but I could tell not long after crunching in that they were far different. The first bite brought some sweet and tangy cheese, but shortly after that, the serious heat arrived. So there was lots and lots of heat, though not that much flavor other than heat once the heat really kicked in. The chips were still tasty, but mostly hot. Very hot.

Smell test: Lots of hot peppers. Made my mouth water.

From the package: “Sizzlin' Cayenne & Cheese” ... “Get ready! The slow-burning fire of new Doritos® Fiery Fusion™ chips is about to be unleashed on your unsuspecting mouth. Things might start smooth with the creamy flavor of cheese, but in no time your tongue will ignite with hot cayenne, jalapeño and spices.”