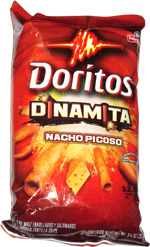 Taste test: Years ago, Frito-Lay rolled out Rollitos, a tubular version of Doritos, but they didn't last. Now, perhaps driven by the popularity of Mexico-produced Taquis, they've brought back the Rollitos shape — but with a twist. Instead of mimicking the of triangular Doritos flavors, as Rollitos did with Nacho Cheesier, Cooler Ranch and Zesty Taco, they've given bolder flavors (again, a nod to Taquis) to the Dynamita line.

Our tasters were sure glad that they did! When offered this bag, people tended to grab not just one Doritos Dynamita, but a whole handful — and then they crunched through the whole handful in short order, often coming back for more. The tubes were crunchy and quite tasty, with loads of nacho cheese and plenty of jalapeño kick. None of the people who tried these had seen them before, and most of them were asking, "Where can I buy some?"

Smell test: Mostly like regular Doritos, but make a hint of jalapeño.

From the package: “They're rolled to explode with flavor!” ... “The authentic Doritos® brand nacho cheese flavor with a kick of jalapeño.”