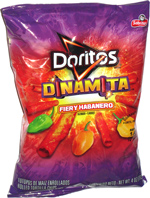 Taste test: This edition of Doritos Dinamita promised to be even hotter than the other flavors, Chile Limón and Nacho Picoso, as habanero tends to be one very hot pepper. We've seen the same flavor name from Doritos before, as their more conventional triangular tortilla chips came in a Fiery Habanero flavor several years back. Much like those triangular ones, these had a light orange color with some reddish accents, like the Nacho Cheese ones. This didn't quite match the red on the bag, as the actual snacks looked quite different from other hot flavors like Takis Nitro that have scary, intense shades of red.

We crunched in to find an initial taste that was mild and cheesy, not really a hot chip. Where was the heat? It came in the aftertaste, and it came with some serious intensity. At first the aftertaste also featured some toasted corn flavor, but as the heat grew, it was hard to notice anything but the heat. Very, very hot. Eat a bunch of them, and we're talking serious, major hot. Wow! Hot.

Smell test: Nice mix of spices and toasted corn, but mild, no heat.

This snack was discovered by Bob Whoppererererer. Review published August 2014.