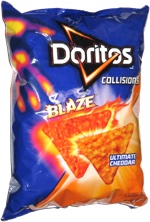 Taste test: It's been a long while since we've seen a new variety of Doritos Collisions, the sub-brand where they take two contrasting flavors and mix them into the same bag. This time, it was the heat of Blaze (a very recent flavor from earlier this year), and the cheesy goodness of something new called Ultimate Cheddar. They even provided separate Ingredients lists for the two flavors.

We opened the bag to find that it wasn't starkly obvious which chips were which flavor. They all had a fairly typical orange Doritos color, but some had some additional red seasoning. When we crunched in, it was pretty clear which ones were which, and it turned out that the Blaze ones varied a lot in how much red seasoning they had, corresponding with the level of flavor/heat.

When we reviewed Blaze on its own, it was a big disappointment, because it was tasty but very mild by hot chip standards, despite promises of major heat. That's why we were so surprised by how great this combination was. This time there was barely any marketing copy on the bag at all, so no super heat hype, nor any explanation for what Ultimate Cheddar is supposed to be. (But don't confuse it with Supreme Cheddar!) The Blaze ones were hot to varying degrees and loaded with superb tangy flavor, and the cheddar ones were fairly typical cheese Doritos that provided the perfect balance to the tangy, hot Blaze. Great!

Smell test: Wow, the heat from this one really kicked me in the face, a really nice smell too.