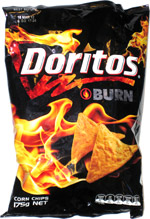 Taste test: These chips looked almost exactly the same as the standard Nacho Cheese Doritos in terms of color and texture.

I crunched in to find a fairly mild mix of spices, so though the chips were tasty, there was not really much of a burn. But then, just as I was thinking about how disappointed I was by the lack of burn, I realized that quite a hot aftertaste that had just snuck up on me, particularly in the back of my throat. So yes, there was some burn indeed.

Smell test: Kind of a tangy take on the usual Doritos smell. Not really cheesy.

This snack was discovered by Jeremy in Australia. Review published April 2012.