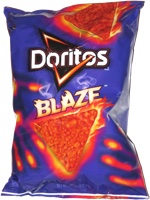 Taste test: This was the shortest and simplest name for a Doritos flavor that we've seen in a while, maybe ever. After seeing the name and the heat hype on the back of the bag, I wondered whether this might approach the heat of the Carolina Reaper Pepper-based One Chip Challenge and then gasped as I realized that this is a big bag with lots of chips — 120 of them based on the estimates in the Nutrition Facts.

I opened the bag to find that the chips had some of the same general orange color as Nacho Cheese Doritos, but there was also an even application of an intense red powder. I crunched in to find a nice flavor, a tasty mix of hot peppers and spices, but the actual heat level was really very mild. Doritos has done some very hot flavors, going all the way up to 3rd Degree Burn, but this wouldn't even make the list of hot Doritos, let along be worthy of comparison to the One Chip Challenge. Disappointing.

From the package: “It's like licking a volcano” ... “Intense flavor eruption” ... “Cataclysmic crunch” ... “Amped up fiery heat”

This snack was discovered by Jeremy at Market Basket. Review published January 2018.