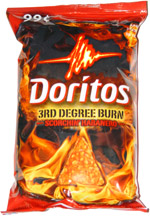 Taste test: This version of Doritos followed up on the 1st Degree Burn and 2nd Degree Burn versions by cranking up the heat even higher. In terms of bag design, they stepped the color up from yellow (1st) to orange (2nd) to red for this maximum-heat one while also increasing the intensity of flames on the burning bag pictured.

When we opened the bag, we found that the chips had lots and lots of red-orange seasoning, a much redder experience than your usual Doritos. We crunched in and were impressed by the heat, which was definitely hotter than 2nd Degree Burn — and tastier too. There was some delay before the heat kicked in, but when eating two chips in a row with no beverage interruption, it was a pretty good kick. Nothing in the same league as the Blair's Death Rain chips but still pretty hot.

This wasn't the first time that Doritos attempted a habanero flavor, as the Doritos Fiery Habanero traveled this path before. The 3rd Degree ones were redder than those while packing more cheese and less heat. (I checked the ingredients, and I was disappointed to find that habanero was not even listed this time, though four different kinds of cheese were included.)

Smell test: Mostly like Doritos, but with maybe some peppers added, though not really a "hot" smell.

From the package: “Can you take the heat?” ... “New Doritos® Burn flavors and Pepsi Max Cease Fire are the perfect combination of tempting heat and calming cool.”