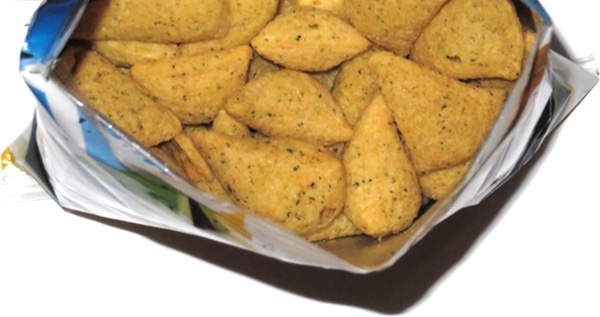 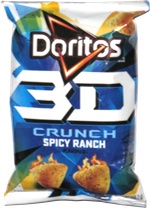 Taste test: The three-dimensional version of Doritos was a fan favorite years ago, and like many fan favorite snacks, it got discontinued. We've encountered snacks bearing the 3D name sporadically in international versions and even locally, but for products that were quite different, such as Doritos Jacked 3D's. That is, until now! Doritos 3D's (shortened to just 3D, losing their apostrophe and S) have finally returned. They apparently had to tinker with the ranch flavor, replacing the Zesty Ranch that we reviewed in 2001 (which was also available in a Go Snacks Mini version) with Spicy Ranch.

The chips looked like isosceles triangular pillows, with a mustardy orange color, plus lots of green bits evenly distributed over the surfaces. They were much smaller than regular Doritos, about 1-1/4 inches in their longest dimension.

I crunched in to find a nice ranch flavor, though nothing spicy about it (yet). The 3D chip reminded me a lot of Bugles for taste (though without quite the same feel). The thin shell and hollow interior provided a nice light crunch, crispy in some pieces and more solid in others. As I was crunching my way through several more pieces, I suddenly realized that the ranch was indeed spicy! The heat was delayed, but once it arrived, it was unmistakable, with a fairly substantial burn. Very good, a worthy return to the snack aisle for 3D's!

Smell test: Really quite nice, but not much spicy ranch to it. More like sour cream and very mild ranch.

From the package: “Taking crunch to another level®” ... “Serving size About 27 pieces”

This snack was contributed to Taquitos.net by the manufacturer. Review published December 2020.