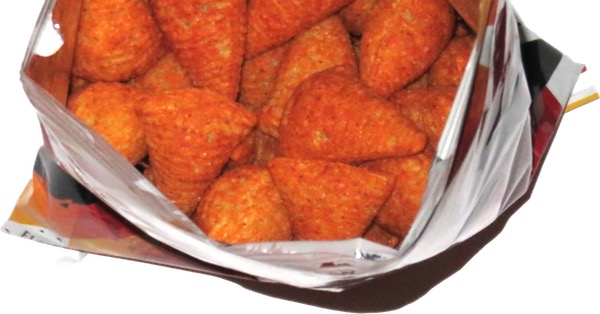 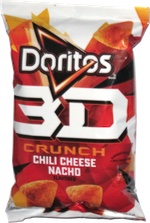 Taste test: After many years in snack purgatory, 3D Doritos have returned, with a Spicy Ranch version hitting store shelves alongside this one, bringing some extra spice to the familiar hollow triangular snack that was last seen in a Nacho Cheesier flavor. The exteriors of the puffed-up triangular pillows had a dull orange color, with some fine darker bits on close examination, and there were subtle ripples in the surface, running parallel to the short side of the isosceles triangle.

I crunched in to find a good crunchy feel, varying in crispness from piece to piece, with a nice chili cheese taste in each case. Despite the identical shape, the experience with these didn't say "Bugles" to me quite as strongly as the Spicy Ranch did. The chili cheese didn't include any heat initially, but after eating many of them in rapid succession (couldn't help myself!) there was a mild burn, not quite as strong as the Spicy Ranch. There's something about this combination of shape/texture/flavor that's very addictive. A very strong comeback for 3D's — I hope they're planning to expand beyond these initial two flavors.

This snack was contributed to Taquitos.net by the manufacturer. Review published December 2020.