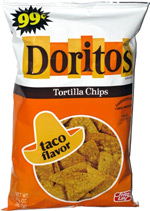 Taste test: This was certainly the most confusing bag of Doritos ever. It was a retro bag using a design from the 1960s or 70s — that much makes sense to me — but beyond that, things get very hazy.

There have been two taco flavors of Doritos floating around in recent years: Taco and Original Taco. The Original Taco version was a modern bag design that was supposed to revive the recipe from when the taco flavor first came out. (These's been some debate on our Chip Talk forum regarding whether it's really the original recipe.) Now, you would think that a retro bag introduced after the Original Taco would also be retro flavor. Yet, this one says "Taco" and not "Original Taco" — but maybe that's just because it's a retro bag, so Original is implied. However, the back of this bag says "Love Doritos Taco? Look for it in new packaging coming soon" with a picture of not the Original Taco bag but the Taco bag. And yet, I checked the ingredients on this bag, and they actually are a perfect match for the Original Taco.

To top things off, when I went to buy this, the cashier pointed out that it was expired (guaranteed fresh until Feb. 22; I bought it on March 11) and asked if I still wanted it, which of course I did, making it retro in yet another way. Anyway, they tasted the same as Original Taco. Long live Doritos!

From the package: “Celebrate Legends Then & Now”