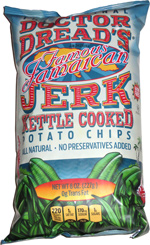 Taste test: These potato chips had a golden yellow color with some areas of browning, plus lots of seasoning on the surfaces, consisting of generally large dark green and black bits, distributed quite evenly throughout. The shapes were very wiggly, including many folded-over chips.

We crunched in to find a somewhat thick cut and fairly hard crunch, plus a tasty mix of spices, dominated initially by black pepper, but morphing into a richer mix after that, including a delayed heat. Not a lot of heat, but some good heat after eating several chips in a row. We shared these with a large group of snackers who had just returned from a run, and just about everyone who saw the bag was eager to try some chips (we had very few refusals to eat) and those who did were very impressed by the taste. Several people expected something hotter but still liked the flavor of what they got.

Smell test: Nice mix of jerk spices. Quite zesty, though not hot.

From the package: “When I first journeyed to my beloved Jamaica in 1977 I never realized my involvement with this beautiful island nation would become such an integral part of my life. I spent over three months walking across the country getting to know its people and extraordinary culture. Eventually I founded RAS Records which went on to become the largest reggae music label in the world. And my love of Jamaica also included its excellent cuisine, especially the jerking process of its meats.”