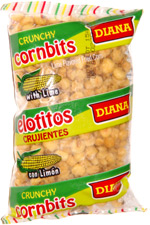 Taste test: These fried corn kernels were crunchy and very tasty, with a strong kick of lime flavoring and lots of salt.

They were very crisp and had a good solid crunch, but the kernels weren't so hard that anybody broke any teeth. Our tasters liked them a lot, as several people went back to the bag for extra handfuls.

This snack was discovered by Jeremy at Mayfair Foods. Review published April 2010.