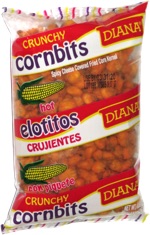 Taste test: We've long liked the crunch and taste of the lime flavor Diana Crunchy Cornbits, so it was nice to find a version that promised to bring some hot spices to the same type of crunchy corn kernels. The shapes of the pieces were much the same, but they looked quite different because there was quite a lot of seasoning on the surfaces, the vast majority of it orange, but with some tiny black bits as well.

We crunched in to find a crisp, loud crunch, definitely solid but not so hard as to break any teeth, with lots of hot pepper spices initially and a bit of heat, plus even more heat arriving in the aftertaste. Great with beer!

This snack was discovered by Jeremy. Review published November 2019.