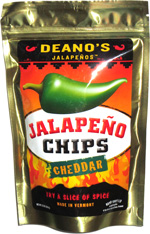 Taste test: These thin slices of jalapeño came in various shapes, with some being full-profile slices of the pepper, while others were smaller fragments.

They had kind of a dull green color with various degrees of bright yellow cheese seasoning. The chips were crisp, light and easy to bite into, and they started out with some mild heat, with a very tasty mix of jalapeño and cheddar flavor. The pieces were small enough, and the jalapeño pepper balanced enough initially by the cheddar, that our snackers tended to throw several pieces into their mouths before realizing that the heat was just starting to hit. There ended up being quite a bit of heat, so these aren't for the weak, but then again, why would someone who can't handle the heat even try crunching into a sliced jalapeño?