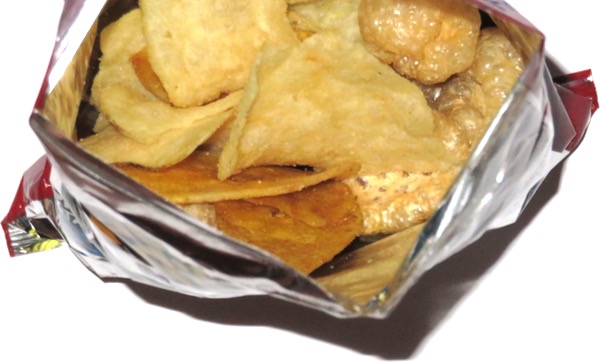 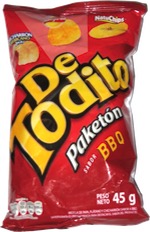 Taste test: This snack mix from Colombia featured pork rinds (Chicharrón Americano) from Jack's, a brand we haven't previously reviewed, along with Margarita potato chips and NatuChips plaintain chips, all said to be coated with a barbecue seasoning (but visually, they looked like plain, unseasoned chips).

I grabbed a few potato chips first and crunched in to find a great light, crispy feel and with a mild BBQ-like seasoning that got tangier and taster after that. Next came the plantain chips, with a texture that was a definite contrast to the potato, less crisp and stiffer, plus a milder underlying taste. Some of them seemed to be seasoned, while others were not, and in one case I noticed some sweet plantain in the aftertaste. Finally, the pork rinds had far and away the loudest crunch of the three, with a strong pork rinds taste, also with a mix of seasoned and unseasoned pieces. A decent mix, with some definite contrasts of tastes and textures.

Smell test: Very mild barbecue smell initially, and then I could smell the pork rinds.