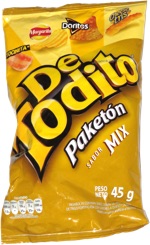 Taste test: This mix of snacks from Frito-Lay's subsidiary in Colombia combined wide-rippled Margarita potato chips (think Wavy Lay's), Doritos, Cheese Tris (think Crunchy Cheetos) and Tocineta (flavored and shaped like bacon). We previously reviewed a mix that had two of these four elements; it should be obvious from the name which ones were in Cheese Tris Tocineta.

The midsize bag contained a good helping of pieces, nearly all of them unbroken. The Margarita chips had fairly flat shapes and very wide ripples, with lots of skin around the edges. They were plain potato chips (though they looked to have some cheese that rubbed off from the other snacks) with a nice crisp crunch and lots of potato flavor. The Doritos tasted like Doritos, adding some nice cheesiness to mix, and the Cheese Tris were crunchy and nicely cheesy too. The surprise was that the Tocineta, though shaped slightly like bacon, with stripes and all, had the mildest of bacon flavors, really weak, thought the texture was light and crisp. A pretty good mix, but adding more bacon to the bacon-flavored snack would have been even better.

Smell test: Kind of like a cross between Fritos and Doritos.

This snack was discovered by Jeremy at Bella's Market, East Boston. Review published . 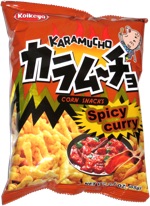