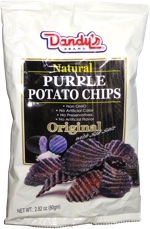 Taste test: Unlike some similar chips that claim to be blue (such as the Terra Blues served on JetBlue), these were sold as being purple, which was a closer description to reality than blue. When we ate some initially indoors, they looked to be a very dark shade of purple. But when we had some later in the bright morning sun, the chips were positively glowing purple.

The chips had wide ripples and curvy shapes. They were were fairly thick and had a soft, crisp crunch. The mouth-feel was very moist, and the potato flavor was quite good. We shared them around (when we were out in the sun enjoying a post-workout breakfast) and everyone willing to try one (which was far fewer than the people we offered some to) really liked the taste.

From the package: “Dandy's Natural Potato Chips are unique. Our product is made from naturally colorful potatoes, rich anthocyanin content, free of any artificial coloring. Our chips are sliced from whole potatoes in a traditional way, not pressed out chips made from potato.” ... “Product of PRC”