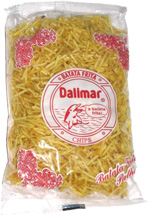 They tasted quite good, with lots of great potato flavor and far less salt and oil than potato sticks usually have. Our tasters liked them a lot, as several people kept going back to the bag for more and more handfuls. People also liked the dolphin on the bag, although nobody could figure out what a dolphin had to do with potato sticks.

Smell test: Sort of potatoey, but not at all oily as potato sticks usually smell.