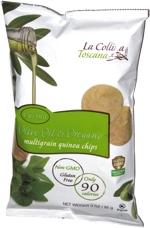 Taste test: These round chips looked kind of like Popchips, but they were even thinner and had less wiggly surfaces. There was some variation in color from one chip to the next, but generally it was in the light beige range.

I crunched in to find a very crispy, somewhat solid crunch with a nice mild taste. Oregano was probably the strongest thing I could notice, but it was fairly mild. Some of the chips seemed thicker than others. Well done, tasty and enjoyable.