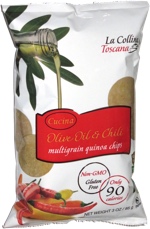 Taste test: Much like the Olive Oil & Oregano flavor from Cucina, these chips looked largely like Popchips, with round, slightly cupped shapes and slightly wiggly surfaces. The multigrain formula here included brown rice, corn, potato, white rice, teff and quinoa. This kind had some dark orange seasoning, though the level of seasoning varied quite a lot, as some pieces had a heavy smattering, while others had hardly any.

I crunched in to find a light crunch with middling crispness, and a somewhat denser feel than these types of chips generally have. As for chili peppers, the strength of flavor varied along with the visible seasoning, as some didn't have much, while other had nice light spicy kick. Pretty good.