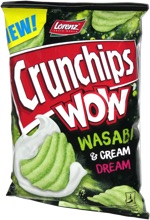 Taste test: These chips from Poland brought a whole new shape to potato chips — they were indeed rippled as the picture on the bag showed, but the ripples were significantly wider than any other ones we've seen, so on first glance it was hard to even notice the ripples. One result of that (and the fact that the seasoned chips were quite green) was that when we shared these in a bowl, some people though it was lettuce.

We crunched in to find that the level of wasabi zing varied from chip to chip, while the cream aspect made for a different taste experience than other wasabi chips, and they were a big hit with our snackers. Great wasabi flavor that went even better with the cream. Mmmm.

Smell test: Definite some creaminess in addition to wasabi.

This snack was discovered by Jeremy at Baltic Deli & Cafe, Boston. Review published .