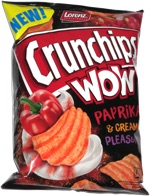 Taste test: These Polish potato chips had the same extra-wide ripples as the wasabi version, with various shades of orange and yellow on the heavily seasoned surfaces. We've had several paprika-flavored potato chips, but this was the first to bring cream into the equation (and the only snack of any kind other than Hershey's Simple Pleasures to mention "pleasure" in its name).

We crunched in to find a good crisp, light crunch and a knockout taste, fairly mild at first, but somehow adding cream to the paprika really worked really well, for high levels of deliciousness that had me returning to the bag over and over. Pleasure indeed!