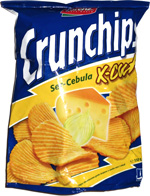 Taste test: These potato chips had narrow ripples and generally a light yellow color, with some occasional areas of minor browning on the surfaces, scattered areas of skin on the edges and a light smattering of large green seasoning bits. (The chips pictured on the front of the bag lacked any of that seasoning.)

The flavor named on the bag (Ser-Cebula) was translated by Google as "cheese bulbs" but the picture on the front showed a big wedge of cheese and an onion, so we figured that "bulb" was just someone's way of saying "onion," and the translation on the back of the bag confirmed that.

I crunched in for a pleasant surprise, as there was a much more solid crunch than you generally get from narrow-rippled potato chips. (With a name like Crunchips, I probably should have expected that!) The taste was pretty good, with a nice potato flavor and a fairly mild but very tasty mix of cheese and onion.

From the package: “Riffled potato crisps with cheese & onion flavor.”

This snack was discovered by Alex's brother in Poland. Review published .