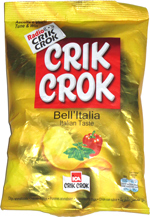 Taste test: These potato chips were generally smallish and had a light orange glow to them, with some light-colored skin on the edges and some smallish bubbles embedded inside.

We crunched in to find a nice crispness and a fairly thick cut, with a mild but tasty flavor. There were some light spices, but not enough to block out the taste of the potato, as it was quite present as well and tasted good. When compared to Salvatore's Sicilian Style chips, an American chip that promised an Italian flavor, this Italian chip promising an Italian flavor was far, far milder. Tasty, just nothing really special here.

This snack was discovered by Cristina Cook in Italy. Review published . 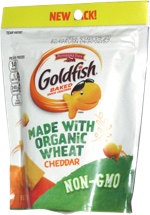