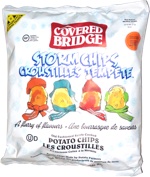 Taste test: Much like the Covered Bridge Weekender Chips, this bag promised four different potato chip flavors in one bag. Since we ate this one after the Weekender, we were figuring it would follow the same formula of having one flavor on any given chip. This time, the clever illustration showed four potatoes bundled up in scarves and hats or earmuffs, with the scarves labeled with the four flavors: Smokin' Sweet BBQ, Sea Salt & Vinegar, Homestyle Ketchup and Creamy Dill.

The major difference when we opened the bag this time was that the different seasonings were at least somewhat obvious. The ketchup ones had a lot of red stuff one them, but they had a fairly weak ketchup taste. The other three were not simple to tell apart by looks, as the dill seemed to have scattered a bit beyond the Creamy Dill ones. But they all tasted good, helped along considerably by the fact that, flavors aside, the underlying chips had an excellent crisp texture and rich potato taste. We ate them during the first snowstorm of the season!

From the package: “A flurry of flavors” ... “Potato Chips Made by Potato Farmers” ... “Dark russet potato chips” ... “The Albright Family Potato Farm began more than 80 years ago when Great Grampy Aubrey planted his first potatoes. Today we carry on an old family tradition with our delicious kettle cooked potato chips that are made just down the road from the Longest Covered Bridge in the World in Hartland, New Brunswick. Each batch is cooked with care like Great Granny Lela made them on her wood fired pot belly stove.”