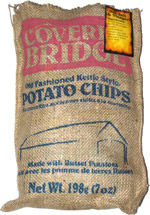 Taste test: We bought these potato chips because they were the first ones we've seen sold in a burlap sack.

This seemed like a gimmick, and it really was, since inside the burlap sack, there was a conventional foil chip bag. However, we'll overlook the gimmick, because the chips turned out to be quite good. The chips had somewhat wiggly shapes, with a golden yellow color and some browning. What made them stand apart from other vinegar chips was the use of Russet potatoes, and it did give them a very different taste. They had a good hit of vinegar flavor, with some zing, but it mixed unusually well with the potato, as you really could taste equal amounts of both. The russet potatoes gave the chips a really nice crispness and drier feel than your usual potatoes. Our tasters liked these a lot, as people kept returning to the bag inside the bag for more and more chips.

From the package: “Made with Russet Potatoes” ... “Covered Bridge Potato Chips is nestled in the heart of potato country in the picturesque St. John river valley. Located in Hartland New Brunswick home of the longest covered bridge in the world lies and old fashioned kettle chip company with old country taste and tradition. Every batch is cooked with care one at a time to ensure the best flavour and texture. Try our mouth watering Potato Chips, you'll keep coming back.”

This snack was discovered by Jeremy at Christmas Tree Shops. Review published October 2011.