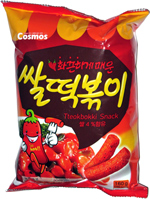 Taste test: This bag contained hollow, tubular snacks that looked kind of like ziti pasta, with a shiny orange/red exterior that also featured some smallish black spots. Lengths of the tubes varied from about half an inch to a full inch.

We crunched in to find a nice, fairly solid crunch, crisp and not too hard, with an initial flavor that was a bit unexpected. We can't read Korean, but among the few words of English on the bag was the warning, "So hot!" ... so we expected hot. The initial taste was not hot at all, but it was tasty, with more of a non-hot pepper flavor. Some heat did arrive in the aftertaste, but it was still not the killer heat that we expected. Still, quite good, and when we shared it with many snackers, and it quickly gained some big fans. The fork-wielding hot pepper mascot on the bag was nice too!

Smell test: Somewhat tangy, slightly west smell, not hot at all. Kind of like an Asian sweet & sour sauce.