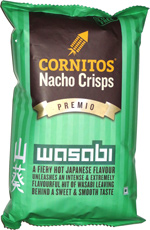 Taste test: These tortilla chips looked much like some of the lighter-colored version of Doritos, such as Cool Ranch, and we could see some light seasoning on the surfaces, though not much. They didn't have any kind of bright green color resembling prepared wasabi as the Wasabi Doritos did.

We crunched in to find a good crisp crunch with a kick of wasabi zing almost immediately — not super-strong, but pretty strong. The bag promised "a sweet & smooth taste" after the wasabi, but we didn't notice much of that; when the wasabi kick receded, it was more of a plain salted tortilla chips taste. Still, they delivered on the wasabi and had a good texture, so we liked these.

Smell test: Smelled like tortilla chips on the first whiff, but I could smell the wasabi after that.

From the package: “A fiery hot Japanese flavour unleashes an intense & extremely flavourful hit of wasabi leaving behind a sweet & smooth taste” ... “Product of India”