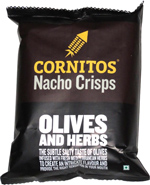 Taste test: Cornitos sells its Nacho Chips in some rather unusual flavors, and they've had some great success in our reviews of several of them. Olives and Herbs was as unusual as any flavor for a Doritos-style triangular tortilla chip, but it also had the widest range of responses from our snackers.

When we crunched in, olives didn't really dominate the flavor, as the herbs took equal or larger billing. Some who tried one thought the taste to be terrible, in one case refusing to have more than one little bite of her first chip before abandoning it, while others liked the taste quite a bit, in a couple of cases declaring these to be the greatest chips they'd ever tried. This one serves as great proof that there's no one best chip for everyone — people's tastes in snacks are remarkably personal.

Smell test: More of the herbs and spices than any olives that we could notice, but pretty good.

From the package: “The subtle salty taste of olives infused with fresh Mediterranean herbs to create an intricate flavour and provide the right sensation in your mouth”