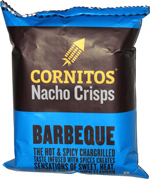 Taste test: These triangular tortilla chips had a mustard yellow color overall, with some dark spots and a light seasoning visible on the surfaces. They looked like Doritos in just about every way.

I crunched in to find a fairly mild taste at first, not really a barbecue flavor at all, but just some mild spices mixed in with the salty tortilla chip taste. As I ate more chips, some heat began to develop, still not a conventional barbecue flavor, but hot and tasty. The spices stayed for a hot aftertaste that lingered for quite a while, even returning for an encore after receding briefly while drinking some apple juice. If you're craving barbecue sauce, get something else, because that's not what the chips tasted like, but these were still pretty tasty chips.

Smell test: Nice mix of spices, different than your usual BBQ chips. Definitely some smoke and hot peppers in there.

This snack was contributed to Taquitos.net by the manufacturer. Review published February 2015.