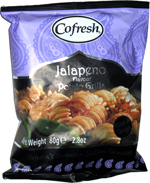 Taste test: This bag contained some of the most oddly shaped snacks we've ever seen.

Each piece was shaped like a gentle arch, with six smaller arches, roughly perpendicular to the big arch, lined up along the arch's span. I don't know how they picked this shape, but when you turned one of these upside-down, it looked sort of like a millipede. The good thing was that the strangely shaped pieces, made primarily from potato, had a crisp texture and tasted quite good. There was some limited jalapeno heat, but the jalapeno didn't dominate, as it was intermixed with other Indian spices. Our snackers were quite baffled by this bag when they first saw it, but they liked the snacks enough to eat the all of them.

Smell test: Lots of spices. Sort of like curry.