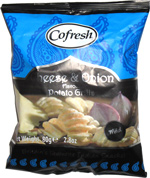 Taste test: These strangely shaped potato crisps (same shape as Cofresh's Jalapeno flavor) had the odd combination of being described as being an Indian snack that was made in England and seasoned with Ireland's favorite flavor combination (cheese and onion). Each grill had an arch shape, with a series of perpendicular arches protruding out of the top.

I crunched in to find a crisp feel and good light crunch, with a strong cheese and onion flavor that mixed very nicely with the potato. The cheese and onion seasoning was more intense than the mild stuff that you typical get on Irish potato chips with that flavor. Our snackers enjoyed eating these as they had some beers.