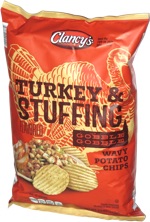 Taste test: We've reviewed several kind of potato chips that incorporated turkey into the flavor, in some cases including stuffing as well, but this one turned out to be mostly about the stuffing. The chips had wide ripples and a generally a light yellow color, but there were also lots of seasoning bits of various sizes and colors scattered throughout.

I crunched in to find a nice crisp crunch and a great flavor, way more like gravy and stuffing than turkey, much like Trader Joe's Turkey and Stuffing Chips. (We've noticed a close connection between ALDI products like this one and ones from TJ's, though in this case, the TJ's version lacked ripples.) Very tasty, hard to stop eating these — and it's way easier than preparing Thanksgiving dinner yourself!

Smell test: Nice mix of potato and spices, in a way that definitely reminded me of stuffing.

From the package: “Product of Canada” ... “We all love snacks, but getting a good one isn't easy.”

This snack was discovered by Jeremy at Aldi Foods. Review published .