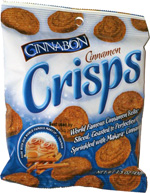 Taste test: A quick glance at this bag had me expecting that the chips inside would taste like Cinnabon cinnamon rolls. A more careful reading of the bag only reinforced this expectation, as it promised to deliver sliced-up and toasted Cinnabon rolls.

I opened the bag and found that the chips actually looked like melba toast with cinnamon sugar, and when I crunched in, they definitely did not taste like cinnamon rolls. They tasted like cinnamon toast, which is far, far different from cinnamon rolls. Most of our tasters actually liked the taste, but trying to sell these with the Cinnabon brand caused a major mismatch of expectations.