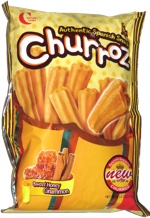 Taste test: This bag introduced two major innovations to the snacking world: 1. A vertical snack bag that was sealed on the sides rather than top. (Not sure this was such a good idea.) 2. Spelling "churros" with a Z. (Brilliant!) Also of note, it was billed as an "Authentic Spanish Snack" but was made in Korea.

The profile of each piece had three separate V-shaped cavities running the length of the piece. Lengths varied, but all pieces were highly truncated as churros go, ranging between and inch and two inches.

I crunched in to find a loud crunch with moderate crispness, though not an extremely hard crunch, with a mild cinnamon sugar flavor. It certainly didn't have the chewy texture of a fresh hot churro, but the taste was pretty good, if less intense than a real churro. The feel was somewhat light, thanks to that hollow interior.

From the package: “Authentic Spanish Snack” ... “Product of Korea” ... “Sweet Honey Cinnamon” ... “Churros is a Spanish style donut with 100 years of tradition. If you enjoy Churros with Chocolate syrup, Ice Cream and Coffee, these can give you extra sweet cinnamon flavor.”