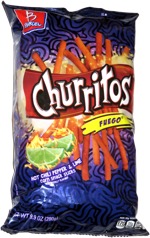 Taste test: This snack from the makers of Takis Fuego promised the same (very hot) flavor, but instead of putting it on the tubular tortilla form factor, in was delivered on the same corn-based stick previously sold with a chile & lime flavor. (This one was also described as chile & lime on the bag, but the original Churritos lacked the fuego.) The sticks had a strong orange-red color, but it wasn't quite as scary as the shade of red on the surfaces of Takis Fuego.

We crunched in to find a very nice crisp corn crunch with a zesty, tangy and spicy hot pepper flavor. It was very tasty but only somewhat hot, as the heat was a full order of magnitude below the very impressively hot Takis Fuego.

This snack was discovered by Jeremy at Tropical Foods, Boston. Review published January 2018.