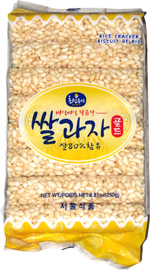 Taste test: Don't they say that good things come in threes? We were hoping so when we spotted these tubes of crunchy, sweet rice at our favorite Asian market, because we found them not long after reviewing the very similar-looking Hello Bee Bee Pon Rice Snack and Bamboo Lane Crunchy Rice Rollers.

They appeared to be most similar to the Bamboo Lane ones, since both featured longer sticks that were not individually wrapped and stuck together a bit. In this case, the sticks were even longer than the Bamboo Lane ones, at about six inches each. The tubes were a bit over an inch in diameter.

We crunched in to find pretty much the same thing, which is to say, a solid but brittle crunch and a nice mild sweetness to the rice. We shared these with lots of snackers, and everyone who tried one was very impressed, in some cases raving on and on about how much they liked them.