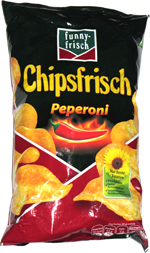 Taste test: We opened this bag and were impressed to find that it was filled nearly to the top with generally large, unbroken potato chips, despite a long voyage from Germany to the USA. Most of the chips had a fairly bright orange glow, with some a bit more on the yellow side. There was very little potato skin on the edges, but there were a few black spots here and there.

We crunched in to find a soft crunch and below-average crispness, not the best texture, but not that bad either. The part of the bag that we translated boasted about how thin the chips were, and they were indeed thin, but not notably thinner than many other chips. Those expecting pepperoni, as in the spicy meat, were disappointed as the German word "peperoni" apparently does not involve meat but just a type of hot pepper. The flavor was a bit out of the ordinary and quite nice, with a mild mix of peppers, plus a bit of heat in the aftertaste. Pretty good chips, but a crisper texture would have made them top-notch.