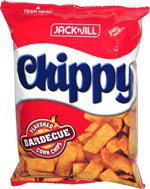 Taste test: These corn chips looked a lot like regular Fritos, in terms of both shape and color, as it took a very close look to notice that there was just the slightest amount of dark orange seasoning to be found.

With so little evidence of barbecue flavoring to be seen, we didn't expect to taste much of it either — but that proved to be quite incorrect. There was a lot of somewhat zesty barbecue seasoning, with a slightly hot aftertaste too. The texture was fairly similar to Fritos, but with a somewhat softer crunch. Nothing special about the BBQ taste, but there was lots of it, in fact so much that mostly we could just taste the seasoning, and not really much of the corn. So the chips really didn't taste like Fritos at all. Nothing special or out of the ordinary, but a pretty good taste and texture.

Smell test: Not much. The the mildest, mildest barbecue seasoning.

From the package: “Guess there's just no explaining the craving for Chippy Barbecue from Jack 'n Jill. It could be the original crunch that makes it everybody's favorite. Or it could be the taste of barbecue so rich, would you even imaging we've given you even more? Maybe it's the crunch and the flavor. Or the flavor and the crunch? But who cares?! Everybody just knows that when it comes to snacks, your instincts always cry out ... Love ko talaga Chippy!”