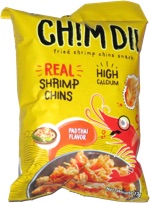 Taste test: These bits of shrimp had a light orange color an odd shapes, with some parts appearing to be the shell of the shrimp. The bag explained that the chin is a particular area below the head, so it was just like it sounds.

I crunched in the find a soft, crispy feel, with a mix of spices (though no heat) initially, then more of the shrimp flavor (and quite a lot of it) noticeable as the spices wore down. The flavor didn't remind me of Pad Thai, other than the fact that Pad Thai often includes shrimp. Despite the appearance of harder parts of the shrimp that are normally peeled off before eating, there were no problems crunching through every part of what was there. A strange one, but a nice texture and taste.

Smell test: Fishy shrimp smell, not bad, but not like pad Thai.

From the package: “fried shrimp chins snack” ... “high calcium” ... “What is shrimp chin? Shrimp Chin is the part under the head of the shrimp with high calcium and more nutrients. Made from Pacific White Shrimp, King prawn of Eastern Pacific Ocean, perfect for one bite, appetizing color and crispy fit for your snacking pleasure.” ... “Product of Thailand”

This snack was discovered by Jeremy at C Mart, Quincy, Massachusetts. Review published .