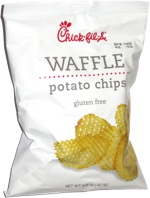 Taste test: We've long been fans of the delicious waffle-cut fries at Chick-fil-A, so as connoisseurs of potato chips (having reviewed more than 1700 kinds), we were excited that Chick-fil-A was giving potato chips a try. The idea seemed to be to mirror the signature cut of Chick-fil-A's fries, but the chips were actually quite a bit thinner than the fries and had much narrower, shallower ripples. (The chips from Alexia look much more like Chick-fil-A's fries than Chick-fil-A's own chips do!)

We've eaten some similarly cut potato chips from Cape Cod and Herr's. These were somewhat like those other brands, but the chips were generally smaller and less curvy. Also, the ripple cuts on opposite sides didn't overlap as much as the other brands, so fewer chips had a grid of holes from the intersecting ripple troughs (though the grid could easily be seen when holding a chip up to the light). We crunched in to find a solid crunch and a light potato taste initially, with more potato flavor showing up on subsequent chips as the salt built up. Pretty good, but not any sort of standout among all potato chips, nor anywhere near as special as the Chick-fil-A fries!

From the package: “gluten free”

This snack was discovered by Jeremy at Chick-fil-A. Review published November 2018.