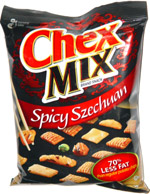 Taste test: This version of Chex Mix consisted of Corn Chex heavily seasoned with an orange-red seasoning, plus assorted shapes of Japanese rice crackers and some dried green peas.

The seasoning was much stronger than I expected, as it was spicy and fairly intense, and it really did taste like some intense Szechuan spices. The rice crackers didn't have as much of the spicy seasoning on them as the Chex did, but they did provide a nice contrast of texture, as the Chex were crisp and cereal-like (obviously) while the rice crackers were much more rigid but still crunchy. The peas were not wasabi peas, unfortunately, but even without any wasabi, this was a pretty intense mix. Very good.

From the package: “Loaded with your favorite Chex® cereal pieces, and flavorful crackers in many shapes!”