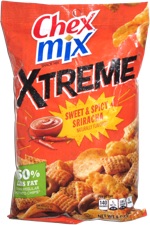 Taste test: This flavor of Chex Mix promised to be "Xtreme" so we figured that it would be quite a bit bolder than your typical Chex Mix flavors by virtue of being Sriracha flavor.

We opened the bag to find that in additional to the usual Chex Mix suspects, the mix included things that looked a lot like Crunchy Cheetos (though very light orange and thinner), so that was a promising change. The rest of the mix consisted of Corn and Wheat Chex with lots of seasoning, pretzels shaped like small circles and 2x2 grids, plus some light-colored melba toast.

We crunched in to a handful of stuff to find a nice mix of textures with a tangy taste that was kind of like Sriracha but without the heat initially and with plenty of the promised sweetness. There was some heat in the aftertaste, but it was quite mild (though tasty). So the mix wasn't "Xtreme" in the sense that, hey, this is Sriracha, so be prepared for some real heat, but it still was quite tasty. Our snackers were impressed.

Smell test: A lot like the Worcestershire smell of the standard Chex Mix.